Truth and Revolution A History of the Sojourner Truth Organization, 1969–1986

Related Products
In the 1970s and 1980s, as the movements of the sixties receded from view, the revolutionary left in the United States went through a series of profound political, demographic, and cultural transformations as it struggled to find its footing in a rapidly changing world. The unorthodox political agenda of the Sojourner Truth Organization represents a small but powerfully resonant thread running through this arc of history. Drawing on detailed archival research and oral interviews, Truth and Revolution skillfully combines social and intellectual history approaches to shed light on both the theory and the practice of STO. Perhaps most famous for its theoretical formulations of white skin privilege, the group also developed a novel analysis of class consciousness that reflected its commitment to an autonomist Marxism. In all the major arenas of its work—factory organizing, anti-imperialist solidarity, anti-nuclear and anti-fascist struggles, among many others—STO combined a strategic assessment of the urgent tasks facing an activist left with a theoretical sophistication that merits sustained attention. Historian Michael Staudenmaier also includes a final chapter linking the legacy of STO directly to the challenges facing twenty-first century radicals.

Praise for Truth and Revolution:

"Few revolutionary initiatives formed out of the struggles of the 1960s left such a profound intellectual and political legacy as the Sojourner Truth Organization. This deeply researched, balanced, and remarkable history shows how STO's practice intersected with its ideas, not only in relatively well-known campaigns attacking white-skin privilege but in shopfloor organizing and anti-imperialist solidarity as well."—Dave Roediger, co-author of The Production of Difference

"Michael Staudenmaier has uncovered a crucial story of the New Left, one that has escaped the attention of most scholars of the era. The members Sojourner Truth Organization would have never have been content with today's so-called online organizing. They went directly to the shop-floor to argue for a better world, where the 'white blindspot' was opened to new visions of solidarity and progress. Staudenmaeir's skilled prose and meticulous research critically honors this history and draws lessons for us today."—James Tracy, co-author of Hillbilly Nationalists, Urban Race Rebels and Black Power: Community Organizing in Radical Times

“Truth and Revolution is a guided tour of the worker militancy, revolutionary nationalist upsurge, and new social movement eruptions of the last forty years. Best of all, Staudenmaier breaks it all down for today’s social movements. Not to be missed.” —Dan Berger, author of Outlaws of America: The Weather Underground and the Politics of Solidarity

Michael Staudenmaier is a veteran of anarchist, anti-imperialist, and anti-fascist movements, and is now a doctoral candidate in history at the University of Illinois at Urbana-Champaign. He lives in Chicago with his wife Anne, and their two children. 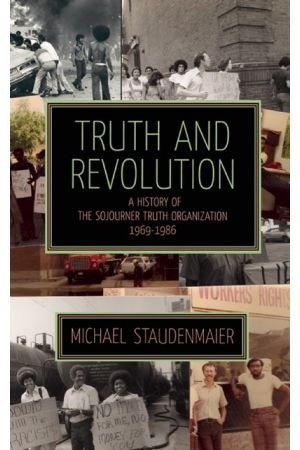